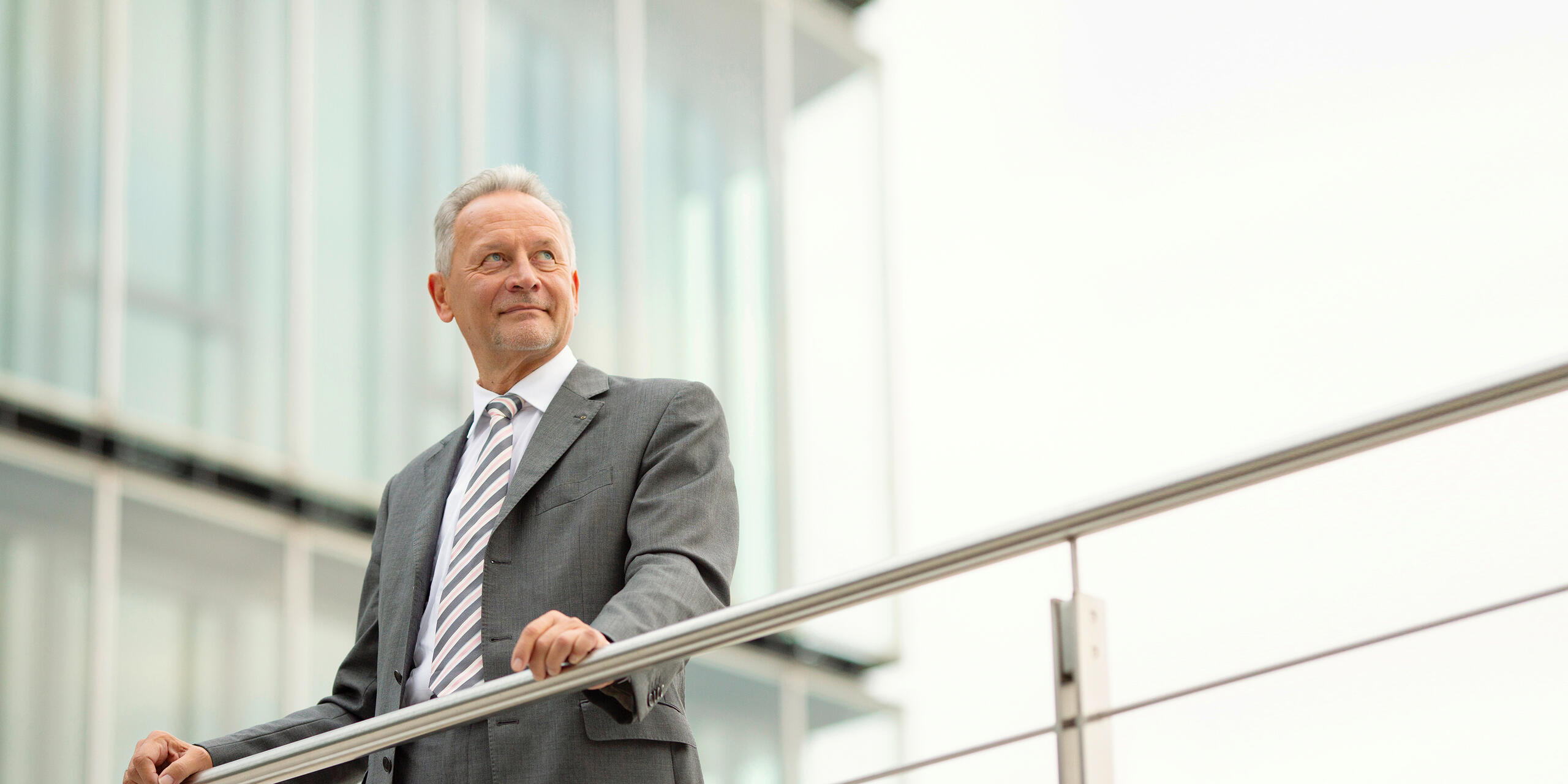 “The objective of a listed stock corporation is clearly defined: to maximise the value of the company over the medium term. This means first increasing customer value and competitiveness. In order to work towards this aim in a targeted manner, it is first necessary to gain an overview of the structural links between the factors that are of economic significance to the company. However, due to the large number of such factors it is impossible to gain a complete overview of all the forces in effect. It is thus important to identify key elements that are of decisive importance for the progress of the business.

The following guiding principle applies here: “If you can’t measure it, you can’t manage it.” Here, “measurement” can be substituted by expert “assessment”. We therefore aim for sub-goals. Once they are achieved, the situation is reassessed and new individual objectives set and pursued.” This is how Wolfgang Grenke explained his corporate and management strategy in an interview.

His sound sense for emerging economic trends, the consistent orientation of his company towards the precisely defined business field of small-ticket IT leasing and the ongoing development of innovative financing concepts make Wolfgang Grenke a successful entrepreneur.

Born in Baden-Baden on 3 February 1951,
married with three grown-up children.

Wolfgang Grenke was first elected to the GRENKE AG Supervisory Board in May 2018 for five years and since then has taken up the position of Deputy Chairman.

Wolfgang Grenke is also a member of the following statutory supervisory boards:

Wolfgang Grenke is also a member of the following comparable German and foreign controlling bodies of commercial enterprises:

Wolfgang Grenke as a promoter of culture and sport

In December 2004 Wolfgang Grenke and his wife Anneliese transferred 675,000 shares to the non-profit GRENKE Foundation based in Baden-Baden. The GRENKE Foundation was established to promote sport – particularly chess sport – in a targeted way. The Foundation is also committed to art, architecture and the protection of historical monuments.

Entrepreneur Wolfgang Grenke and the GRENKE Foundation opened the LA8 Kulturhaus in Baden-Baden in April 2009. He had always wanted to “renovate a palace” – and now he has succeeded in refurbishing the Palais on Lichtentaler Allee, which dates back to 1820, making careful new additions based on old designs to create a cultural centre – the LA8.

The LA8 Kulturhaus is a centre for cultural activities which is supported by the GRENKE Foundation. As the centrepiece, it houses the new building of the Museum für Kunst und Technik des 19. Jahrhunderts (Museum of 19th Century Art and Technology). Of particular thematic interest are the crossovers between art and technology in the history of ideas. These aspects are highlighted in themed exhibitions that change every six months and are conveyed to visitors through a large number of exhibits and publications accompanying the exhibitions. The museum can already look back on widely received exhibitions that met with a positive response in the international press.

In June 2004 Anneliese and Wolfgang Grenke transferred a share package worth EUR 1.27 million to the Festspielhaus in Baden-Baden and in doing so helped to strengthen the financial base of the only privately operated opera and concert hall in Germany. The Festspielhaus is Europe’s second largest opera house and presents a broad programme of concerts, ballets and operas.

On June 13, 2010, Wolfgang Grenke was awarded the cultural initiative prize by the European Foundation for Culture. The award paid tribute to the founder of Kulturhaus LA8 for his cultural accomplishments, the effects of which are felt far beyond his home town of Baden-Baden. In his laudation, Prof. Robert K. Freiherr von Weizsäcker, former President of the German Chess Federation, highlighted Grenke’s exemplary work in encouraging young people in the game of chess.

On February 02, 2011 the mayor of the city Mr. Wolfgang Gerstner presented the golden medal of honour of Baden-Baden to Wolfgang Grenke because of his great honorary achievements for his hometown Baden-Baden. Gerstner thanked Wolfgang Grenke and praised his great engagement in the cultural, educational, social, and sport sector.

Wolfgang Grenke as a supporter of young people and education

Wolfgang Grenke considers our responsibility towards subsequent generations to be particularly important. His ethos and duty as an entrepreneur are based not only on planning and managing his company in a long-term, sustainable manner, but also on supporting young people and education through the GRENKE Foundation in Baden-Baden.

In Grenke’s view, this patronage can partly be explained using mathematical logic: “Everything with which one wishes to create lasting value is oriented towards and planned for the very long term. Essentially, this must be passed on to the next generation. For this reason, the things I do are connected with young people.”

A particular concern is the advancement of young people and addiction prevention, which also includes promoting scientific knowledge in this area.

Wolfgang Grenke encourages the SRH Hochschule Berlin by providing his network and his knowledge. In addition since 2016 GRENKE AG funds an endowed chair for Entrepreneurship and supports the establishment of a research institute with the main focus on business start-ups, the Grenke Centre for Entrepreneurial Studies. Thanks to this outstanding commitment, Wolfgang Grenke was appointed Honorary Senator of the SRH Hochschule Berlin on September 25, 2017.

GRENKE Consolidated Group supports “Columbus – discover classical music!”, an education programme at the Festspielhaus Baden-Baden aimed at introducing school children to classical music. The school groups discuss the content of the concerts in class, can take part in orchestra rehearsals and then experience “the finished product” during a grand concert evening at the Festspielhaus Baden-Baden. GRENKE Consolidated Group provides a subsidy to reduce ticket prices. Over 35,000 school children have taken up this offer in the last few years.

Despite his international success as an entrepreneur, Wolfgang Grenke has kept his feet on the ground.

In spite of, or perhaps because of, the international presence of his company, he feels particularly attached to his native and home town of Baden-Baden and the Mittelbaden region. As a child he enjoyed the many leisure activities Baden-Baden has to offer, playing in the Black Forest Nature Park. Today, he makes a substantial contribution to the cultural development of the health resort and spa town through the activities of the GRENKE Foundation.

Wolfgang Grenke was first elected as the new president of the Karlsruhe Chamber of Industry and Commerce in April 2013 and re-elected in 2017. During his upcoming term, his focus will primarily be on securing qualified personnel, addressing the digitisation of the economy and promoting further and continuing education.

Since November 2016, Wolfgang Grenke has been president of the Baden-Württemberg Chamber of Commerce and Industry (Baden-Württembergischer Industrie- und Handelskammertag [BWIHK]) and has made it his aim to further the internationalisation of Baden-Württemberg’s high-export economy, integrate foreign citizens and refugees into the economy and focus on the expansion of Industry 4.0.

Since 2017 Mr. Grenke has also been a member of the board of the German Chamber of Commerce and Industry (Deutscher Industrie- und Handelskammertag - DIHK) and Vice-President of Eurochambres, the association for the European chamber organisations.

Social responsibility is also a matter of personal importance to Wolfgang Grenke, particularly in times of economic crisis. In his view, many of the current economic problems are a product of the short-term thinking adopted by most corporate managers, which is contrary to the long-term orientation necessary. Therefore, museum pedagogics played a particularly important role for him when planning the new Museum of 19th Century Art and Technology. A museum pedagogic concept was developed specifically for school groups in coordination with the school syllabuses in Baden-Württemberg, making the museum an attractive location for learning outside of the classroom.