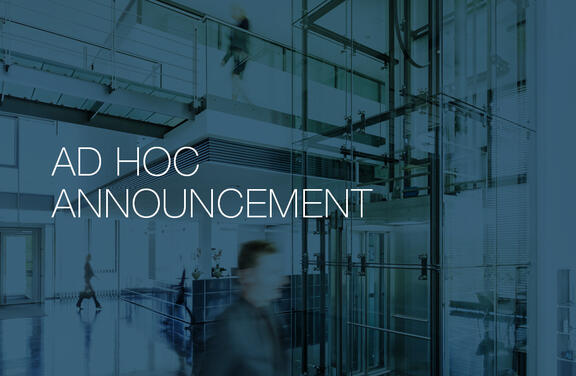 Baden-Baden, Germany, February 26, 2021: GRENKE AG today informs about the interim status of the ongoing special audit by the auditing firm Mazars, which has been mandated by the German Federal Financial Supervisory Authority (BaFin). The Board of Directors and the Supervisory Board of GRENKE AG had requested a respective written interim report from BaFin about the current status of the ongoing audit. BaFin has not yet made a final assessment of the findings raised by Mazars.

According to Mazars' interim report, no findings have been made that cast doubt on the legal validity and economic substance of the lease contracts with outstanding receivables of around EUR 5.6 billion. According to the report, the allegation of money laundering has also not been confirmed. Generally, there is no systematic need for goodwill impairments on acquired franchises. According to the report, the valuations are justifiable despite methodological deficiencies.

In addition to the exonerating statements, Mazars' report also contains significant points of criticism. For example, Mazars considers it necessary to consolidate the franchise companies. The report also criticised the failure to disclose related parties in previous annual financial statements, the procedure of parts of GRENKE Bank's customer lending business, and the money laundering prevention process. The report also contains the already known findings in the areas of internal audit and compliance.

GRENKE AG has already responded in the past weeks and months to material findings from the ongoing audits. Meanwhile, GRENKE has started to make relevant further improvements in its internal processes, expanded its Board of Directors to include a chief risk officer, and structured departmental responsibility more clearly, among other things. Following the resignation of Board of Directors member Mark Kindermann, the Supervisory Board intends to strengthen the Board of Directors.

The following detailed information from Mazars represents an interim status. The final report on the commissioned special audit is still pending.

No indications of money laundering

According to Mazars, the allegation of money laundering has not been confirmed. Mazars thus confirms the interim results of the ongoing audit by the auditing firm KPMG, which GRENKE had reported on in December 2020.

However, Mazars considers GRENKE AG's internal control measures regarding money laundering prevention to be not effective in certain areas and that the material and personnel resources of the money laundering officer show substantial deficiencies.

No doubts as to the existence of the leasing business

According to Mazars, there are no doubts as to the existence of the leasing business, which constitutes GRENKE's core business with leasing receivables of EUR 5.6 billion. This finding also confirms the interim results of the ongoing KPMG audit from December 2020.

In connection with the lease receivables, Mazars also reviewed GRENKE's due diligence on resellers. GRENKE currently works with around 36,000 resellers who broker the leasing relationship with the end customer. Mazars identified weaknesses in the internal audit system. According to GRENKE, these findings need to be reviewed. Mazars has found no evidence to support the allegation of systematic fraud by resellers.

Mazars confirms that no systematic errors were made in testing the recoverability of goodwill on franchises already acquired. Despite methodological deficits, the valuations of goodwill are considered justifiable in individual cases. When valuing the former franchisees at the time of the acquisition, there were both upward and downward deviations from the originally agreed purchase price mechanism. The purchase prices were not systematically overstated.

Warth & Klein Grant Thornton (WKGT) had already referred to the purchase price deviations in its expert opinion in December 2020, but had come to the conclusion that the acquisitions of the 17 franchise companies can be described as positive overall for GRENKE AG .

In this context, Mazars criticizes the returns of CTP and the other financial investors ex post as excessive. Mazars concludes this from an analysis of the top 10 acquisitions by amount of goodwill. Mazars points out that for the franchise investments between 2003 and 2018, paybacks of EUR 62.6 million compared to investments of EUR 7.2 million occurred. Franchise companies not acquired in the past accounted for losses of EUR 6.5 million, which are not included in the EUR 62.6 million.

Reassessment in accounting of the franchise business

The retroactive full consolidation leads to a change in the depiction of company acquisitions, notably exclusively in the consolidated financial statements according to IFRS. This has no effect on the Group's cash flow. No goodwill is shown in the consolidated Group’s balance sheet for the franchises acquired after December 31, 2012, and thus since IFRS 10 came into effect. The acquisitions are accounted for directly in equity. Equity is reduced by around EUR 90 million compared with what has previously been shown. According to preliminary calculations, the balance sheet equity ratio is close to 16 percent, which corresponds to the Group's target level. However, this effect is largely neutral for the calculation of the regulatory equity ratio, as the regulatory equity is always adjusted for intangible assets such as goodwill.

As a result of the consolidation of the franchise companies, Mazars' comment that an impairment loss of approximately EUR 8 million would have had to be recognized for the former franchise company in Croatia as early as December 31, 2019 is obsolete. As no goodwill is recognized in the balance sheet for the company in Croatia under the new accounting treatment, no impairment losses are required.

Related parties included in the notes

Mazars has criticized that Corina Stingaciu was not identified as a related party in the group accounting, although the relationship with Wolfgang Grenke appeared to be known within the GRENKE Group. According to now available information, GRENKE lists her and the entities controlled by her as related parties in the 2020 annual financial statements and will also provide this information for the previous year as a precautionary measure. This does not have any impact on the figures.

The Mazars report lists several deficiencies at the subsidiary GRENKE Bank. These include violations of the Minimum Requirements for Risk Management (MaRisk), which relate to complaints in the customer lending business. Specifically, a number of granted loans were mentioned in which either no or insufficient collateral was provided or the borrower's ability to service the loan was not sufficiently verified.

Essentially, these relate to loans to small and medium-sized enterprises with a volume of around EUR 37 million, which is a very small proportion of the Group's total assets of more than EUR 7 billion. Moreover, the bank had already stopped accepting any further new business since spring 2020 due to the Corona pandemic and has now decided to discontinue this lending business. Mazars classifies the deficiencies as serious. This also applies to the bank's money laundering prevention, which Mazars assesses as not fully compliant with legal rules. However, Mazars has no evidence that GRENKE Bank has systematically and actively promoted money laundering.

GRENKE takes the aforementioned critical points very seriously. Among other things, the company plans to quickly and comprehensively revise the instruments and processes for lending and money laundering prevention and to strengthen GRENKE Bank's Board of Directors.

Another finding by Mazars concerns the methodology for calculating risk provisions in accordance with the IFRS 9 accounting standard. Model and documentation weaknesses are identified. With regard to the model, Mazars finds, among other things, that GRENKE has not yet taken into account macroeconomic factors. GRENKE AG continues to use its model-based approaches derived from statistical methods, but has expanded them in line with the standard, without causing significant changes in the estimates of the amount of risk provisions.

The Mazars report also contains findings on missing or ineffective process-dependent controls in the internal control system as well as severe findings on the internal audit and compliance organization. The latter two largely coincide with the criticisms made by BaFin, about which GRENKE had provided detailed information in the letter from the Chairman of the Supervisory Board dated February 8, 2021, and which had led to the resignation of Board of Directors member Mark Kindermann. The Board of Directors has begun to significantly develop the internal control system on the basis of these findings.

GRENKE expects an after-tax result in the upper double-digit million range for fiscal year 2020. The balance sheet equity ratio as of December 31, 2020 was around 16 percent. The company has net liquidity of EUR 1,290 million as of February 22, 2021.

The time-consuming audits in particular were the primary cause for significant delays and the reason it has not yet been possible to set a corporate calendar for 2021.

The audit opinion with regard to the consolidated financial statements is expected in the second quarter of 2021. KPMG will report the final results of the audit as of December 31, 2020 in the audit report and in the auditor's opinion.

The Board of Directors remains in very close and constructive contact with the auditing company KPMG for the normal audit of the annual financial statements and with the other auditing companies in the context of the ongoing special audits. Isabel Rösler, who has been a member of the Board of Directors since January 2021, is responsible for coordination with BaFin and monitors the implementation of the measures decided on the basis of the audit results. On the Supervisory Board, Jens Rönnberg has assumed this role as interim Deputy Chairman of the Supervisory Board, who joined GRENKE in November 2019.

GRENKE: CEO temporarily resigns from the Board of Directors due to illness

Baden-Baden, November 21, 2022: The Supervisory Board of GRENKE AG today revoked the appointment of Chief Executive Officer Michael Bücker at his own request for a limited period until February 28,...

Baden-Baden, October 4, 2022: The Board of Directors of GRENKE AG, a global financing partner for small and medium-sized enterprises, is raising its forecast for new leasing business for the 2022 f...