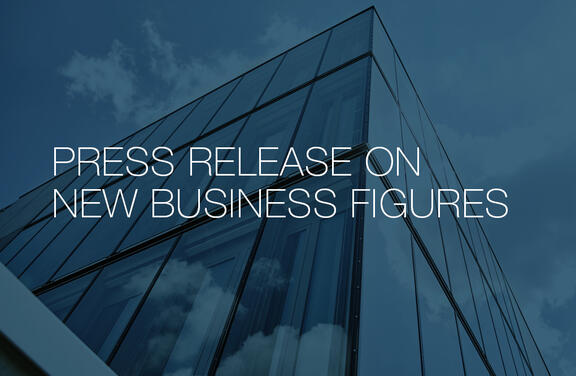 Baden-Baden, October 4, 2021: GRENKE AG, a global financing partner for small and medium-sized enterprises, achieved new leasing business of EUR 372.2 million in the third quarter of 2021 (Q3 2020: EUR 517.6 million). Global supply bottlenecks, specifically at manufacturers of computer and office equipment, were the cause of the weaker year-on-year new leasing business. The contribution margin 2 declined slightly in the third quarter due to refinancing costs and amounted to 17.1% (Q3 2020: 18.4%). New business volume is the total acquisition cost of all newly purchased leased assets.

GRENKE’s chair of the Board of Directors, Michael Bücker: " Following my first few weeks at GRENKE AG, I am convinced of its potential as a backbone for financing SMEs." In addition, GRENKE BANK AG has been accredited as a partner bank of the German Federal Government’s Microcredit Fund for the third consecutive time. In his comments, Michael Bücker stated: "Building on this strong starting position, we intend to accelerate our business in the fourth quarter of 2021 and, therefore, have launched a sales campaign." Dr Sebastian Hirsch, Chief Financial Officer of GRENKE AG, added: "With the successful increase in our latest issued bond, we have proven our refinancing ability on the capital market, laying the foundation for additional new business in the upcoming year."

Development of the percentage contribution margin

The contribution margin 2 (CM2) of the new leasing business amounted to EUR 63.6 million in the third quarter of the current financial year (Q3 2020: EUR 95.2 million). The CM2 margin was 17.1% (Q3 2020: 18.4%). The CM1 margin in the reporting quarter stood at 10.9% compared to 12.7% in the same quarter of the previous year. The CM2 margin as well as the underlying CM1 margin were primarily impacted by increased refinancing costs. Going forward, GRENKE expects refinancing costs to decrease again, leading to a return to rising contribution margins.

The GRENKE Group received a total of 100,416 lease applications in the third quarter of 2021. Of the total, 22,339 applications originated in the DACH region and 78,077 applications in international markets. At the Consolidated Group level, 48,724 new lease contracts were concluded from these applications, corresponding to a conversion rate of 49%.

With a purchased receivables volume of EUR 178.5 million, GRENKE Group Factoring's new business recorded a favourable increase of 15.6% compared to the same period in the previous year (Q3 2020: EUR 154.4 million).

On September 9, 2021, the GRENKE Group increased an existing bond (ISIN: XS2155486942) by a further EUR 125 million, further strengthening its liquidity base for the continued development of new business. The high order book demand of over EUR 230 million confirmed the capital market's confidence in GRENKE. The issue yield is approximately 2.5%. The bonds totalling EUR 125 million will trade under the code ISIN XS2386650191 until October 25, 2021. Subsequently, they will merge into the existing quotation under ISIN XS2155486942.

GRENKE BANK has once again been awarded the Microcredit Fund Germany of the German Federal Government, under the direction of the German Federal Ministry of Labour and Social Affairs. Following the launch in 2015 and the extension three years later, this is the third time that GRENKE has assumed the role of lender of government microcredit loans of up to EUR 25,000 for micro, small and medium-sized enterprises (SMEs). In the past six years since its launch, the microcredit fund has helped a total of 1,703 micro-enterprises and SMEs to set up or expand their business with 4,656 loans with a volume of more than EUR 120 million.

New member of the Board of Directors of GRENKE BANK

As already announced by the Company on June 29, 2021, the second position on the Board of Directors of GRENKE BANK AG has been newly filled in the meantime. On October 1, 2021, Dr Oliver Recklies (51) took office as a member of the Board of Directors of GRENKE BANK AG where, as the successor to Sven Noppes (45), he will be responsible for the back office. Dr Recklies holds a degree in banking and business administration and was responsible for back office, finance, risk management and controlling in his previous positions at various cooperative banks. Most recently, he worked for DZB Bank headquartered in Mainhausen. Since 2017, he has been responsible for the majority of the back office, all risk issues, IT and digitalisation as well as finance and accounting as a general representative and authorised signatory.

The quarterly statement for the third quarter and the first nine months of 2021 will be published on November 10, 2022.

Baden-Baden, May 25, 2022: Today, GRENKE AG held its ordinary Annual General Meeting, which was again held as a virtual event. The shareholders of GRENKE AG resolved to distribute a dividend of EUR...

Baden-Baden, May 23, 2022: GRENKE, a global financing partner for small and medium-sized enterprises, today announced it had signed agreements to purchase the franchise companies in the USA and Sin...